Puerh tea benefits stem from the deeply complex fermentation process of traditional Chinese tea leaves. It just might also be the most complex tea on the planet.  Puerh, a delicious and smoky tea, benefits health because is rich in antioxidants and fermentation products that reduce inflammation in the body.  By dampening inflammation, it may reduce all chronic diseases.

What is Puerh Tea?

Puerh is fermented tea that comes in tea cakes or loose leaf varieties.  This tea  comes from trees that are from 700 to 1000 years old in a very remote village in the Yunnan region of China [R].  There are many names for Puerh, including Pu erh, puer,  pu’er, po lei, dark tea, black tea, and bolay  tea

The long fermentation and carefully controlled conditions of aging of the tea leaves is what sets it apart.  This process makes the teas taste complex and deep. This is why Puerh tea may appeal to those who like bolder flavors like coffee.

Many types of puerh tea are on the market today. Lake Missoula Tea has a great Puerh tea that I tried called Shou Puerh. It has a complex, deep, almost woody flavor. I’m drawn to a specific kind of  Puerh called Shou Puerh a lot because I love strong flavors.

The complex properties  of Puerh outshine the benefits of the popular green matcha tea. Read on to learn more of the fascinating Puerh tea benefits.

Ritual and secrecy of women healers are central to the power and history of Puerh. This tea is made from ancient tea trees and then fermented by traditional methods.  Secrets of Puerh tea-making are also deeply hidden still today.

Thousands of years of healing traditions, including the healing powers of Puerh tea, are passed down by women to their daughters. Women hold the power of plant medicine here in the Yunnan part of China.

Puerh tea has a vast number of healthy compounds [R].  It is rich in antioxidants that reduce inflammation in the body.  By dampening inflammation, it may reduce all chronic diseases.

These antioxidant compounds help protect the body from pollution, toxins and more.

Puerh also has many compounds that helps the digestive tract, including probiotics, prebiotics, antibacterial compounds and healthy fungi.

In a small village on Jingmai mountain, there are over 100 people over the age of 100, many still with health and vitality.  They drink a lot of puerh tea. Science shows that pu erh tea benefits and any other tea for that matter, may be partly due to the ritual of tea.  Frequent tea drinking, in general, may increase lifespan.

The Ritual of Tea

I am an unapologetic coffee drinker.  Lately, though, yearning for more variety in my life, I am pulled toward the mysteries and complexities of tea.  Coffee feels wonderful, but also hurried and over-stimulating at times.

We need to, as a society, take time to incorporate ritual and slowing down.  Tea is perfect for this.

Drinking Puerh tea is different than drinking other black tea. It has a very complex, smoky flavor.

Puerh tea may improve memory and protect the brain because it has numerous compounds that reduce inflammation.

Puerh may protect the nervous system by reducing a toxin called glutamate in neurons [R]. 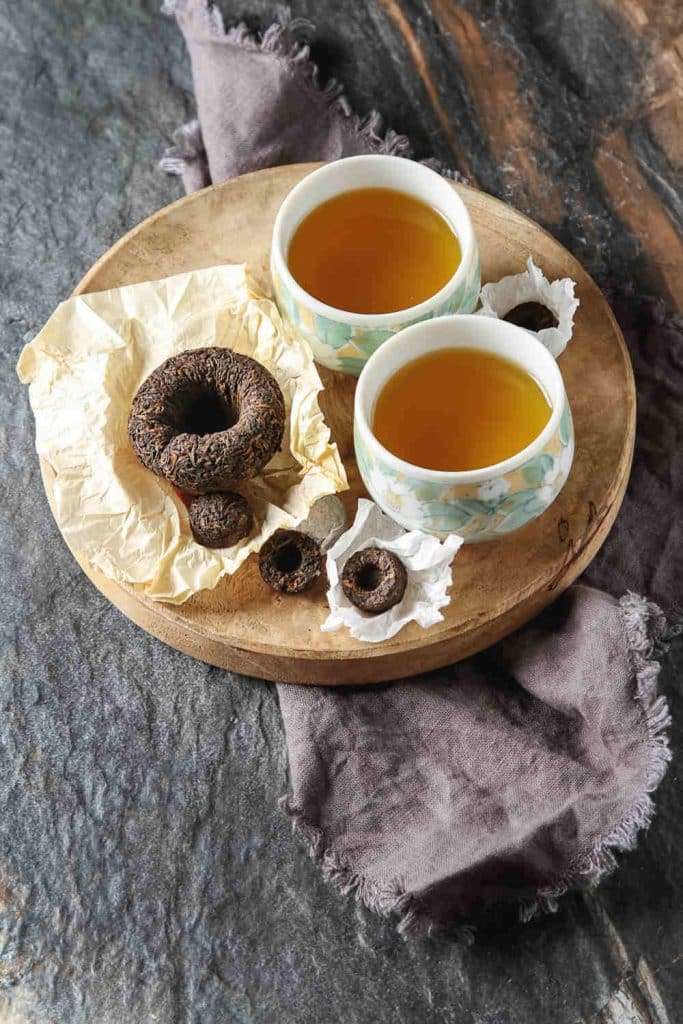 Many people swear that they lose weight while drinking Puerh tea. Now, research is proving that Puerh tea benefits may truly be to maintain and lose weight.

Fat loss in the arm, belly and legs within the Puerh group also occurred.

Puerh Tea is Energizing and Relaxing

Like all tea, Puerh has small amounts of caffeine, but also contains L-theanine, which helps the body relax.

Warm beverages are known to help the body warm, which in turn can be calming.

In a study of 59 overweight or obese adults, cholesterol levels known as small, dense LDL levels  improved with Puerh tea drinking using 3 grams of tea per day compared to placebo. The dangerous cholesterol numbers were improved in 4 weeks as well as 8 weeks.

Puerh, especially the types that are fermented for longer duration, contain statin, a known compound that lowers cholesterol.

Puerh Tea is a Probiotic

Probiotics are critical to our immune system and for keeping our digestive tract healthy.

Puerh tea is complex and its composition is highly dependent on how it is fermented, stored and aged.  Fermented foods have probiotic effects and help digestion.

Many people aren’t aware that fungi can play roles as probiotics and prebiotics.  Think mushrooms.

Samples of two different Puerh teas found both had around 390 fungal strains and around 630 bacterial strains in each, making them probiotic in nature.

Fungal diversity is greater if made from fresh tea lives in the traditional fermentation methods.

In contrast, yogurts typically only have a handful of strains of bacteria [R].

Fermented of tea increases antioxidants.  These include gallic acid, resorcylic acid, quercetin, and kaempferol  [R]. These are all beneficial compounds in the body.

I found over 10 preclinical studies that studied the effects of Puerh on cancer:  all of them reduced growth and/or spread of tumors.  Here are examples of what I found:

The health effects of slowing down enough to sit and sip some tea with a good friend or family member are also important.

These days you can find Puerh in many places.  Why does source matter?

Pu erh tea benefits depend on the quality of the fermentation and quality of the tea leaves.  Find tea companies like Lake Missoula Tea that help support farmers of tea and support growing sustainable and quality tea.  They help elephants survive and thrive in a world with ever-increasing demands on land space.

Buy organic teas that are from ancient tea trees.

Health benefits of Puerh tea and all teas are vast and rigorous in research by now. But quality will always matter.

How To Brew Puerh

Drinking Pu erh tea is safe.  If you are sensitive to caffeine, you may want to limit your tea intake to 2 cups or less per day.  I prefer to drink my tea before noon to minimize any chances of caffeine-induced insomnia.

Puerh tea has positive health benefits, but could interact with medications such as:

As always, talk to your doctor before starting a new food or beverage.